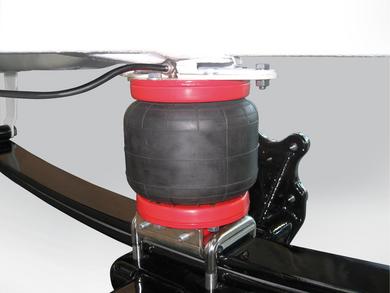 Vacation – as always everything has to come along. There is generally no space left in the motorhome for the big things. The solution: An external load carrier. The AL-KO Backpack 150 has been completely technically and visually revised and is the answer to many transport questions. Its loading capacity of 150 kilograms is enough for all sorts of loads – for up to four bicycles, or a scooter and two bicycles at the same time. This is possible thanks to the modular construction, which makes configuration of the load carrier extremely flexible. The AL-KO Backpack 150 is available in two basic versions – as a scooter carrier or as a bicycle carrier. The modular concept of the platform is so flexible that both versions can later be modified to function as the other carrier at a later stage. Incidentally: The AL-KO Backpack can now be attached not only on AL-KO AMC chassis or AL-KO rear extensions, but also on many more motorhomes with original chassis or rear extensions. The attaching elements and reinforcement pieces differ in construction and therefore also in price depending on the vehicle. The Backpack 150 is available from September 2014.

Because it is designed as a scooter/bicycle carrier the AL-KO Backpack 150 is equipped with a fixing bracket which, if desired, makes fixing of the scooter handlebars possible with an additional supporting arm. It also has wheel brackets, lashing straps with ratchets and a loading ramp which can be stored easily and simply in the carrier platform. The basic configuration of the AL-KO Backpack 150 as a bicycle carrier includes two flexibly adjustable setup kits for two bicycles, a retaining bracket and a cross bar for fixing of the bicycle handlebar holding arms. The basic version of this carrier is set up for the transport of up to three bicycles, though a further modification kit with additional supporting arm is required for the third bicycle. For the transport of four bicycles there is an expansion kit available which includes a fourth module for the carrier platform as well as the modification kit. This extension is naturally also possible for the scooter carrier.

For design of the Backpack 150 the focus was on consistent lightweight construction, great user friendliness and automotive-style design. For this reason the new taillight carrier has a modern, slightly silver look which means the load carrier system is better integrated into the overall look of the car. The steel and saltwater-resistant aluminum load carrier system offers optimal weatherproof protection on its platform, making transport of bicycles and scooters possible without any damages. Practical: When not being used the AL-KO Backpack 150 can be removed without needing tools.

The new AL-KO Backpack 150 is available from September directly from the AL-KO Customer Centers North (Neuenkirchen-Vörden) and South (Kleinkötz), at Sawiko and in dealers. It comes in two basic versions: For scooters or bicycles from €1,595 including VAT.